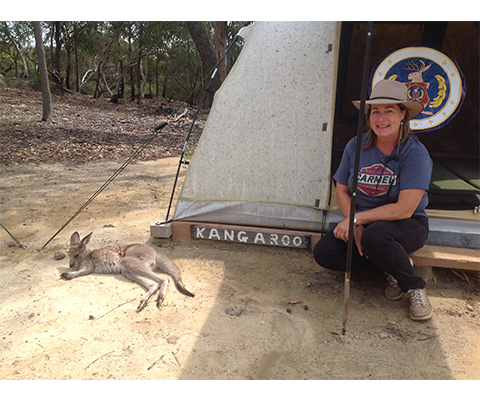 Tell us a little bit about yourself and what led you to work on children’s television shows as a career.

I have worked in film and television production in Canada for 30 years as an Assistant Director. I began as a Production Assistant on sets in the AD department, then graduated to Fourth, Third, and Second Assistant Director over the first 12 years of my career. For 18 years now, I have worked solely as a First Assistant Director, and one of my first shows in that position was on a terrific children’s puppet show called The Mighty Jungle. I loved the innocence, education, and fun in those scripts, but it wasn’t until 2015 that I began working on kids shows regularly with Sinking Ship Entertainment.

Prior to my film career, I had worked with young kids in different areas: first as a choir director (especially for Christmas Masses each year!), as a catechist (at the local school, teaching religion to first grade children), and, finally, after university, I worked as a nanny for two years in London. I have always loved kids and continue to enjoy playing my guitar and singing with them. Whenever we have completed filming on Odd Squad close to Christmas, I have been very happy to organize a little Christmas choir with the kids working on the show!

Although I didn’t spend a lot of time watching TV growing up--we spent as much time as we could running around outside back then--I do remember watching and loving Sesame Street with my youngest sister. I loved the puppets, the humor, and especially the music as I was singing and playing instruments from a very young age!

What are the steps that go into your role for an episode of Odd Squad?

In my job as a first assistant director, I begin with an analysis and breakdown of the scripts to create what we call the shooting schedule. Basically, I put all the scenes of a script into a different order, which we will then film each day. I have to identify all the individual elements and production needs in each scene. For example, I determine which actors are in each scene, how many background performers will be needed, the props, stunts, locations, camera, special equipment, and art department requirements.

I do this work in consultation with the producers, director, production designer, and locations manager, but other department heads have to be consulted as well along the way. Once we have all settled on a workable shooting schedule and pre-production is concluded, we begin to film each day of the schedule. I am the person on the film set managing the movement and timing of the day and yelling, “quiet please,” and, “roll sound!”

My assistants take care of getting the actors ready for filming through the hair/makeup and costume departments and getting them to me on set for a pre-planned time. My second AD produces the call sheet every day, which is a film crew’s most important working document. It includes our call times, pickup times, scenes to be shot, elements needed for each scene for example, and most importantly, the locations and addresses of where everyone needs to report each day to film--maps included. It would be a disaster if people showed up to the wrong place!

I’m afraid I can’t come up with a favorite Odd Squad episode. I really, truly loved all the scripts and the kids!

What do you like to do when you’re not working on the show?

When I am not working on a show, I love to golf, sail, and go for long walks with my husband. We also love to travel and spend time in our other home in Nova Scotia right by the beautiful Atlantic Ocean. I do still love to play the guitar and sing as well!

We Oddballs have loved following the adventures and antics of the Odd Squad Mobile Unit throughout the season! What was it like filming on-location in Australia?

Filming in Australia was a tremendous experience, and everything about it was special! I have never flown that far away, so I was a little nervous. However, we had a fantastic time from the moment we landed. We were able to visit and film at a wildlife reserve where kangaroos, koalas, and emus were roaming around on their own. We filmed a day at an amazing 1920s-style amusement park in Sydney called Luna Park. The Sand Queen villain filmed with us that day, and she and the kids and many of the crew were able to go down the old-fashioned but VERY steep slides.

We also filmed a day right in front of the famous and stunning Sydney Opera House. The actors, their parents, and various members of the crew spent our one day off walking Bondi Beach and enjoying Sydney’s downtown Sunday market. It was all just amazing, and the whole experience really is a highlight of my many years in television!