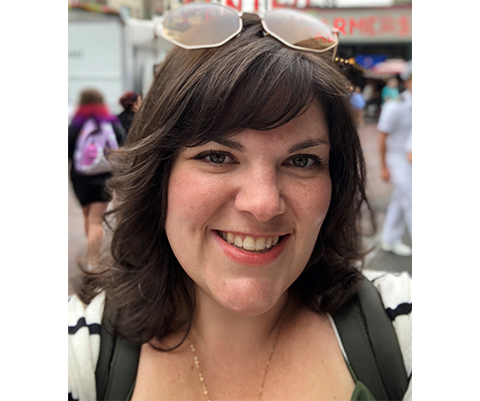 Can you share a little bit about yourself and how you came to work at Fred Rogers Productions?

Oh, mine is just a story about a girl who grew up in New Jersey, loved TV like it was her best friend, thought she’d become a journalist, went to a liberal arts college for English, landed happily in the world of educational media after college, and got really lucky when she moved to New York City in 2008 and landed a job working on the PBS KIDS series Cyberchase. I was there for 11 years, and by the time I left, was executive producer and story editor, overseeing all broadcast and digital content and beyond.

When I learned that Fred Rogers Productions had a new puppet series greenlit that was inspired by characters from Mister Rogers’ Neighborhood, and that they needed someone to produce it, I couldn’t say no. I feel there are few, fortunate chances in children’s media to be part of an honored legacy like Fred Rogers’—not to mention launch something completely new. I had visited Pittsburgh a couple times and knew it was a cool town with lovely people. So, I packed up and headed (slightly further) west.

Where do I begin? There were honestly so many! All my favorite shows, from when I was young to my teenage years, helped me feel like I could “make it”—in small, everyday ways and big, “life” ways. I gravitated toward female characters who were independent and confident (for sure Punky Brewster), fearless and fun (Pippi Longstocking, anyone?), imperfect and relatable (paging Angela Chase from My So-Called Life), and aspirational go-getters (hello, Angela Bower from Who’s the Boss?). I’m so excited that Donkey Hodie is a little bit of all these things—and will be a role model for resilience and perseverance.

What are the steps that go into your role in making Donkey Hodie?

I help guide the series’ curriculum, character and story development, and creative vision overall, and work closely with our amazing partners at Spiffy Pictures. First, I collaborate with our child development advisors to determine which curricular themes we’ll address in our episodes (themes like taking things slowly or facing fears are two examples). The writing team at Spiffy takes those themes and develops stories around them, and I help shape them along the way. Once scripts are complete, the team heads into pre-production, which includes things like set and prop design, puppet design, and songwriting. Then, we shoot! And from there, post production begins, with review of rough cuts, visual effects, audio mixes, and more...

What is your favorite part about working on Donkey Hodie (without giving spoilers)?

Without question, it’s the people. I’m surrounded by talented, passionate, kind, funny, and dedicated people every direction I turn. From our puppeteers and production design team to our writers, crew, and post-production team, everyone’s creative input is making this series so special. I can’t wait to share it with the world soon. (No spoilers yet!)

Is there anything else you can share about Donkey Hodie and her pals?

Well, we’ve created a neighborhood full of quirky, hilarious, and lovable characters in the world of Someplace Else. Some are brand new, like Donkey Hodie herself. She’s the granddaughter of the original Donkey Hodie created by Fred Rogers, now known in our show as Grampy Hodie. Other friends like her best pal, Purple Panda, are also inspired by characters from Mister Rogers’ Neighborhood. It’ll be fun to watch the audience discover old and new friends along the way.

What do you like to do when you’re not working on the show?

Right now, my main hobbies include following home designers on Instagram and scouting local home and vintage shops (and yes, Target) to pull together my new apartment in Pittsburgh. It’s getting there!

What is it like to be a new Pittsburgher, and do you have any favorite things to do or places to go?!

I’m still learning the ropes! I’ve finally figured out “the Pittsburgh left,” which feels huge. Exploring food spots around my neighborhood has been a top priority, and some of my early favorites are KLVN Coffee Lab, Commerce Bar, Bitter Ends Luncheonette, and East End Brewing/Larder of East End. I have so much more to see and do!