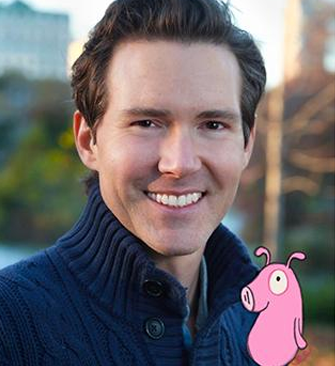 Get to know Tommy Wazelle. He talks about his lifelong love of music, his affinity for all things porcine.

How did you make vocal performance your career?

I grew up in a musical family. My mom and dad actually met singing in their university choir while majoring in music education. My dad played saxophone and became a band director, and my mom sang soprano and taught choir. At home, my mom played piano, my dad guitar. Along with my younger sister, we would sing together as a family. We performed in musicals together at the community theatre. We sang in church and I sang in the school choir. Both my sister and I took up trumpet and played in the marching band. I majored in music in college, getting a bachelor’s degree in trumpet performance and music composition. I wrote for, played trumpet and sang in an eight-piece funk band, then later a nine-piece swing band, leading me to seriously study voice for my master's degree. I acted in plays and sang in musicals and operas during that time. After school, I started performing in opera and musicals professionally, which propelled me to New York where I eventually became involved with a great organization for the development of new opera called American Opera Projects. It was there, years before, that Billy Aronson wrote the libretto for a new opera, Fireworks, for which my future wife, Ann, was a principle singer (small world!). When I sang there, years later, AOP’s general director kindly recommended me to Billy to sing the part of an operatic Pig on his new PBS Kids show, Peg + Cat.

The thing is, my college mascot is a Razorback, which is a wild boar. I grew up cheering for the Arkansas Razorbacks. Like a good Razorback does anywhere among other “Hog” fans, I wore a hog hat and I’d “call the Hogs” at games, on airplanes, at restaurants, and everywhere else one might be shocked to hear an en masse “Woooo, pig soooie!” My twitter name is even @operahog. So, when presented with the opportunity to become an actual opera pig on TV, I jumped at the chance, feeling as if I’d prepared for it my entire life

As a kid, I loved Sesame Street. I loved all the characters, the music and the learning opportunities. My favorite character was Big Bird’s “imaginary friend,” Mr. Snuffleupagus. He was this giant, lovable woolly mammoth that only Big Bird and I could see. I knew he was real, but others on the show somehow thought he didn’t exist. They’d miss him when he came around, and then they’d treat Big Bird like he was a delusional psychotic when he mentioned his friend had been there for a visit. As a child, it was a frustrating thing to witness.

I remember one episode where they all went to Hawaii, and there was a Mt. Snuffleupagus that had the distinct profile of a woolly mammoth. After that episode, I saw Mt. Snuffleupagus’ everywhere in the rolling hills and mountains while on frequent family car trips through Arkansas, Oklahoma and Texas. It was my secret only Big Bird and Snuffy could understand.

What are the steps that go into doing voice work for a television show?

I always receive an email of the script with my highlighted lines, along with several MP3's that contain a demo recording of the entire show, my cues with a demo voice, and my cues played by a piano. Although Pig only communicates through grandiose, operatic singing, I don’t receive any written music.

My first step in the preparation process is to listen to the episode while following the action in the script in order to learn the story and discover my purpose within it. Then I set to work on my individual lines, speaking the lines, finding specific intentions and making acting choices that are consistent with my character. Only then am I ready to begin the fun of adding the singing.

It’s always interesting to listen to the demo voices, usually the writer or composer, who give their best renditions of the voice of Pig. It always makes me smile as they attack the singing with such gusto! If I need a little extra help finding the exact notes, I’ll turn to the piano track. Once I’ve found the right feeling for the line, I’ll let it rip into my voice recorder and play it back. I’ll do that as many times as it takes to really have something solid enough that it can then be further refined through direction in the studio. I like to be as prepared as possible before I walk into the recording booth so I’m not wasting anyone’s time.

At the studio, Billy, Jen Oxley and Steve Rebollido are there to work with me. The second I open my mouth to deliver my first line, they always look awe stricken, and those huge smiles on their faces always make me feel like a million bucks. Working with people who share such positive and encouraging energy is one of my favorite things about being Pig. In that moment, they remind me of something I often forget; that what I do is special and should never be taken for granted.

What is your favorite episode or song on Peg + Cat?

I love “The Pig Problem.” Pig runs off to join the opera, and he ends up singing one of the greatest tenor arias ever written, “Di quella pira” from Il Trovatore by Giuseppe Verdi. This particular performance of the piece was quite unique, as Pig’s big scene begins with a duet between him and a brontosaurus soprano who is deathly afraid of mosquitos. After the duet, the aria commences as he whips out a calendar and explains how mosquitos appear in the warm months and hide in the cold months, ending his spiel with a rather long and showy high C. It’s hilarious! That’s not something I get to do every day.

But, as much as I loved doing that, my favorite episode is one in which I didn’t appear. I love “Peg Meets Cat” the most because my three-year-old daughter played Baby Peg, and my four-year-old son played Baby Pig. They walked into the studio and absolutely nailed their cues, which just blew me away. They were so young, they don’t even remember being there, but I’ll never forget it. I was amazed and proud of them then, as I am now and on a daily basis. I’m glad we’ll always have that episode to share together. It’s special.

What do you love most about playing Pig?

The best thing about playing Pig is that I get to be part of a show in which I really believe. The mission of education behind Peg + Cat is an important one. We do it through math and friendship and art and music and joy and compromise, understanding, compassion, humor and love. It’s about immensely talented and dedicated people from top to bottom and every way in between, putting their hearts and souls into each and every detail of every episode. I’m really lucky I’m able to show up on occasion and contribute to it. That makes me happy.

What kind of music do you love to play or song when you're not working?

Fortunately, I’m able to sing just about everything I want outside of the show, when I’m working as a freelance artist, and even when I’m not working. One minute I’m singing Beethoven’s 9th with the New York Philharmonic, and the next I’m dancing down the grand staircase of the Met Gala chanting “Like a Prayer” with Madonna. I often go from operatic repertoire to jazz to rock to Bach and Handel to all kinds of choral music, and the friends I perform with are my everyday colleagues in the churches and the synagogues, the recording studios and the concert halls all around town. Every now and then I’ll get the trumpet out and work up my chops, but it’s really hard to find the time around singing. Eventually, I’d like to do a vocal/trumpet recital, get out to a jazz club with a pianist or a band, sing more funk, and compose more music for myself and others. I’m pretty busy as it is, so those things will come. 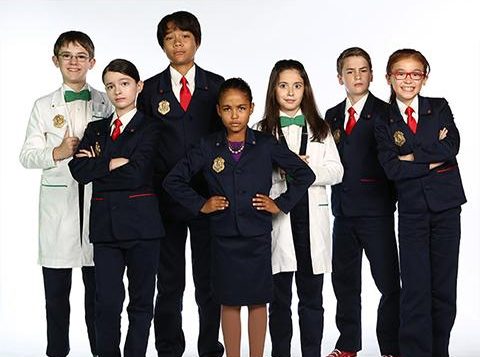 Odd Squad is Back and On the Move on PBS KIDS 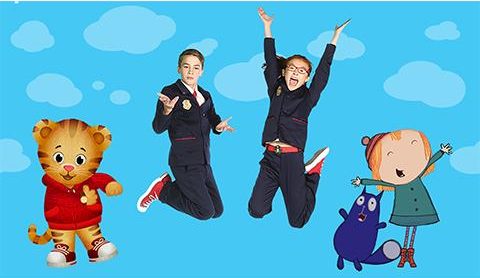